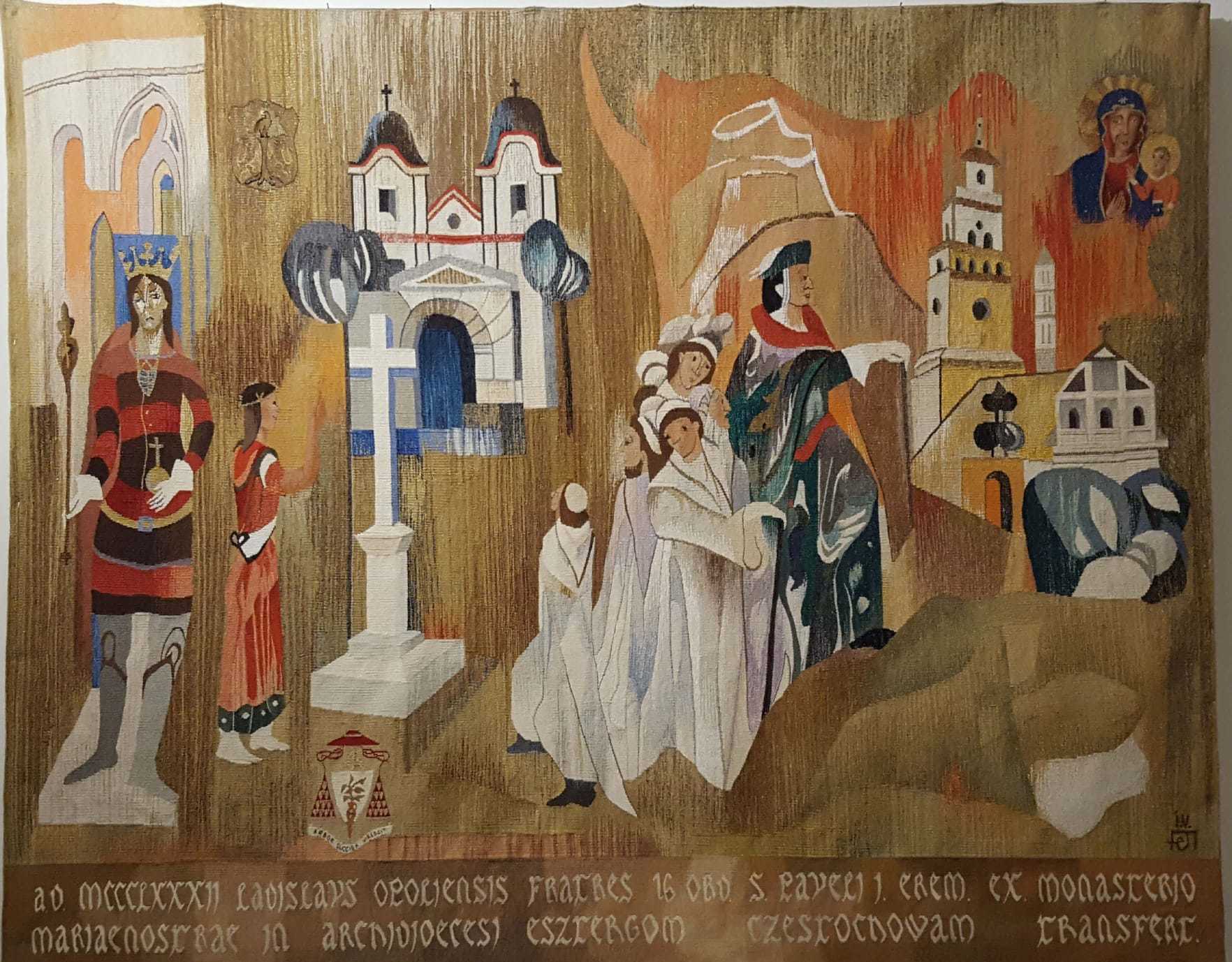 The full name of the Pauline Order is Ordo Sancti Pauli Primi Eremitae – Order of Saint Paul the First Hermit (OSPPE). The Orders founder, Blessed Eusebius, took this name from St. Paul the hermit of Thebes, who lived in southern Egypt in the years 228-341, and whom the Church solemnly recognised as the first hermit during the canonisation of 491 in Rome during the pontificate of Pope Gelasius I.

The Pauline Fathers can claim to be part of a rather exclusive club. Many assume that Paulines are hermits, like their patron saint, Paul the First Hermit. Instead, Paulines are canonically monks. They are, properly speaking, one of 7 orders of Monks in the Western Church. They have their place just after the Carthusians and before the Hieronymites.

Since the Benedictines dominate monastic life in the Western Church, the Paulines are notable because they follow the Rule of St Augustine. Unfortunately, people confuse Paulines with Dominicans or assume that the Paulines are friars. This mistake is easy enough to make, considering the Pauline habit is very similar to the Dominican, and the orders are organised into provinces. But Dominicans are friars, whilst Paulines are monks.

Bl. Eusebius founded the Pauline Order in Hungary. Bartholomew, bishop of Pécs, gathered the first Pauline community from hermits scattered in the forests and rocky caves. In 1225, he built a monastery and a church dedicated to St. James on Mount Patacs and made the first rule of monastic life. However, the Pauline Fathers regard Bl. Eusebius of Esztergom as the father and founder of the Pauline Order. He received a vision in which many little flames in the hills around Esztergom come together into one large fire. He took this vision to mean that God was calling him to gather all the hermits living in the hills into one monastic community. So together with his first students, Stefan and Benedict, he founded the monastery of the Holy Cross, where they immediately began to live according to the pattern of St. Paul the First Hermit, cultivating especially devotion to the Mother of God. In 1250, both monasteries merged under the leadership of Bl. Eusebius but still living according to the rule they received from Bishop Bartholomew. It was the decision of this new community of hermits, who had become monks, to take as their patron saint one that was very dear to them, St. Paul the First Hermit. They did so in 1263.

In the year 1308, Cardinal Gentilis, legate of Pope Clement V, granted the Order on behalf of the Holy See the Rule of St. Augustine and officially approved the Order of St. Paul the First Hermit. A year later, the first religious constitutions were approved.

The Order of St. Paul the First Hermit Spreads

This started the golden age for our Order. The Order spread rapidly from Hungary and the Balkan Peninsula, where it soon had over a hundred monasteries, to the surrounding countries such as Poland, Austria and Germany and was also known in Italy, France, Spain and Portugal, from where it reached South America with the first pioneers of Christianity.

From Hungary, the Pauline Order spread to the territory of Croatia, where they established about 50 new monasteries. There in Remete, the Order built its first Marian shrine. In Croatia, the Pauline breviary and missal were introduced. In addition, the Paulines ran their own schools, including a university. Among the Pauline monks, there were bishops and even one cardinal.

In 1381 we received the relics of St. Paul at one of our Monasteries in Hungry. The following year, in 1382, a monastery was founded on Jasna Góra in Częstochowa, Poland, where the monks placed the Icon of the Black Madonna.

This came about when Prince Władysław Opolczyk brought the Pauline Fathers to Poland from Hungary from the Marianosztra (Our Maria) Monastery. So the Pauline Fathers came to Częstochowa in 1382, receiving the Jasna Góra hill with a small church dedicated to the Mother of God. In it, they soon placed the Miraculous Image of the Blessed Mother, brought by the founder from Bełz, where the faithful had held it in great veneration for centuries. In the course of history, Jasna Góra has become the spiritual capital of Poles, a symbol of the faithfulness and religiosity of the nation, and, as the first Pauline monastery in Poland, the mother of other religious houses.

The Pauline Order reached its peak of development in the 16th century when in the countries of Europe, and even in Palestine and Egypt, there were 300 monasteries in 8 provinces and may have reached a peak of about 8000 monks. However, the defeat of the Hungarian army at Mohacs in 1526 brought great havoc to the Order as the Kingdom of Hungary fell to and was occupied by the Turkish Ottoman Empire. The Turks demolished or despoiled dozens of monasteries, archives and libraries, burned down and martyred the monks, often hanging them by their leather belts. Because Hungary formed the heart of the Order and the Order itself never really spread beyond Central Europe, the fall of Hungary delivered a crippling blow to the Pauline Order.

From the 17th century, the Order flourished in Poland. The Paulines entered a lively and dynamic period of apostolic activity, teaching the people through missions. They devoted themselves to scientific work. More than once, they stood at the forefront of national uprisings as defenders of church and national values. At the end of the 18th century, the Polish province had over 80 monasteries, residences, parishes and Pauline administrations. The monks continued to expand their pastoral activity, caring for the sick and suffering. At that time, the Order built new churches and other buildings in a simple and beautiful style developed by the Paulines (churches in Warsaw, Krakow, and Leśna Podlaska).

In the 18th century, by order of the Austro-Hungarian emperor Joseph II, the Pauline Order, along with many others that were not involved in active work, were suppressed. This essentially wiped out the Order in Croatia, Austria and what little remained in Hungary.

Poland, the last stronghold of the Order, was finally divided and partitioned amongst its hostile neighbours in 1795, during which the few remaining houses of the Order were isolated, weakened and eventually dissolved. So the period of national captivity became a very unfavourable time for the Order. The Order, which continued its pastoral and intellectual prosperity (university studies at Jasna Góra and Kraków), suffered from this dissolution of the religious orders. Of all the existing monasteries in the former Polish-Lithuanian Commonwealth, the dissolution decrees of the partitioning powers liquidated the monasteries in Wieluń, Beszowa, Brdów, Pińczów, Oporów, Warszawa, Wieruszów, Stara Częstochowa, Konopnica, Włodawa, Leśniów, Leśna Podlaska and other places. Only two monasteries survived this historical turmoil: Jasna Góra and Kraków, becoming independent houses.

By the turn of the 20th century, we had only two houses left in Poland. One was the Monastery of Jasna Góra. The other was another important shrine at Kraków dedicated to Saint Stanislaus, the patron saint of Poland, who has a story similar to that of Thomas á Becket. But, of course, it did not help much that one house was on the German side of Poland and the other on the Russian side.

Rebuilding the Order in Poland

After Poland regained independence, the Order was slowly revived. In 1920, the Jasna Góra and Kraków monasteries merged, and the first general chapter was called, during which Fr. Piotr Markiewicz was elected general of the Order. During this period, the organization of Zkon included three houses: Jasna Góra, Kraków and Leśna Podlaska (from 1919). After World War II, the Paulines also returned to other former institutions, regaining, among others, Warsaw (1950), Brdów (1952), Wieruszów (1983) and others.

Currently, the Pauline Order is still developing. Currently in Poland, apart from Jasna Góra, where the General House is located, Pauline monasteries and religious houses are: in Bachledówka near Zakopane, Biechów, Błotnica near Radom, Brdów, Częstochowa – św. Barbara, in Kraków at Skałka (the monastery and the Higher Theological Seminary), Leśna Podlaska, Leśniów – Żarki (novitiate house), Łęczeszyce, Oporów near Kutno, Łukęcin, Pauliny-Mochów, Świdnica, Toruń, Warsaw, Wągrowiec, Wielgomłynach, Wieruszów, in Włodawa, Wrocław and Żarki-Letnisko. The Paulines also have monasteries in many European countries (including Hungary, Croatia, Slovakia, Germany, Spain and Italy), they are present in the United States and Australia, as well as on missions in South Africa and Cameroon. The Order currently has nearly 500 members.

Over the centuries, the spiritual profile of the Order and its mission have changed. From the essentially hermitical character of the original community, over time, in the face of changing circumstances and opening up to the signs of the times, the Order has acquired the characteristics of a semi-contemplative community. The charism of the Pauline Fathers is included in a relatively broad group of features that constitute the charism of the Order. These are a contemplation of God in solitude, love of liturgical prayer and penance, Marian devotion, and pastoral activity as a service to God’s pilgrim people.

The Order in the Modern Day

As of 2020, the Order has 71 houses with 493 monks (366 priests). It is currently honoured to have three bishops, Łukasz Mirosław Buzun, Auxiliary Bishop of Kalisz (Poland), Stanisław Jan Dziuba Bishop of Umzimkulu (South Africa) and Columba Macbeth Green Bishop of Wilcannia–Forbes (Australia). The current Father General is Fr. Arnold Chrapkowski.

The Church dedicated the Black Madonna

Our Lady Help of Christians

The chapel dedicated to Our Lady Help of Christians

Blessings at the Fatima Grotto

Stations of the Cross

View of the Stations of the Cross

The Pauline Fathers outside their Monastery

Marian Valley – Shrine of Our Lady Help of Christians is about 10km from Canungra and south of Brisbane in the Gold Coast Hinterland.  It was founded by the Pauline Fathers in 1995.  Its main chapel is dedicated to the Black Madonna and has many other smaller chapels built by pilgrims of the Shrine.  Marian Valley also has a retreat center where pilgrims can come and stay.

The Shrine Church full of Pilgrims

Procession to the Grotto

The Fathers and Brothers leading a procession the Grotto

Some of the International Shrines built at the Monastery

At Penrose Park in the Southern Highlands of NSW, there is a shrine dedicated to our Lady of Mercy, represented by a replica of the Icon of Our Lady of Jasna Góra, known as the Black Madonna.  The Shrine is run by the Order of St. Paul the First Hermit known as the Pauline Fathers.  The Pauline Fathers have been custodians of the original Icon of the Black Madonna since 1382.